This luxury apartment on 2 floors (3rd floor and top floor) was completed on 01.03.2011. It has a rentable living area of 85.5 sqm. The optical floor area (minus the pitch of the roof) is even over 100 sqm in size. This apartment, which was designed in the rental property at a later stage, is one of the “artists’ homes” within the properties of the Berlin-based Dannenberg family of property developers.

The apartment is in fact something extraordinary, something that doesn’t comply with ordinary standards. It was created by the architectural psychologist and developer, Thomas Dannenberg (Dipl.-Psych.) back in 1997 (actually for his own purposes as a holiday apartment with the highest “living world luxury”). At that time, however, the project came to a halt during the construction phase as the City of Göttingen was not minded to approve an additional 25th apartment for this property. This apartment was subsequently approved by the Göttingen authorities in 2010/2011. In terms of interior design, it was then finalised by the architect’s offices of Thomas Hirt and the construction was implemented by the Göttingen construction company, Dawe.

The focus of the target criterion was that a private living world does not exist solely in the traditional “living and sleeping space”, but that areas, such as the kitchen and bathrooms can also provide “living worlds”, if they are designed differently, namely larger, and also exceptionally or extravagantly. For example, the kitchen is not just a small kitchenette, but rather, as the primary living room alongside the entrance area and a guest toilet, forms the whole room area of the lower floor of this maisonette and ends to the rear in a small balcony on the garden side. The kitchen therefore forms the centre and living area for conviviality and well-being. The ancient concept of a so-called “living kitchen” is reborn.

If you look up, you’ll notice that there is no ceiling. You will see a bridge connecting your living room with the spa bathing area on the 2nd floor. Continuing to look up to under your roof will give you living feeling of wideness and freedom. Large electrically-operated skylights flood light all over the various living levels of your private residential world.

Your bathing landscape: you can lie, for example, in your designer bath and look through the four oversized skylights, which are about 3 metres above, into the clear, starry sky. The size, that is the expanse and look of this wellness area, begins with a glass wall extending to under the sloping roof, which you can open by means of a sliding door to enter the rest of your living world, and which serves to render the optical capaciousness even more transparent. Specially selected recessed spotlights offer the opportunity to create different “islands of light”.

Between your living room and the bedroom is a walk-in dressing room, which in terms of content and function takes up on the idea that private living worlds should not be ‘filled up’ with pompous wardrobes, because in modern interior design, the following principle applies: only reductionist furniture creates a greater sense of space. Less can be more. This type of living world not only leaves it mark on your soul, but your partner, your visitors, your guests will all associate your “individual living world” with your personality, with your charisma. “Living” an apartment in which you can “play host” as well have your private retreat, may well be an innovative feature for this residential unit.

The “generosity” is also implemented structurally in the heating and ventilation system: the resident will not have any radiators in the rooms which might upset the optical and spatial effect. The entire maisonette features an underfloor heating system under the designer and tiled floors. This type of heating is unique in the entire rental property and also provides cost advantages for the tenant. The low-temperature heating system provides significant and lasting energy cost savings. Furthermore, all the exterior walls and sloping roofs are designed not only in accordance with the latest energy regulations, but have also been implemented structurally. Your well-insulated living world boasts a ventilation system with additive heat exchanger. As a result, and in contrast to open window ventilation, only the lowest possible amount of heating energy is lost, but an optimum healthy indoor climate is maintained (medical aspect). This leads to a significant increase in quality of life for people with allergies. 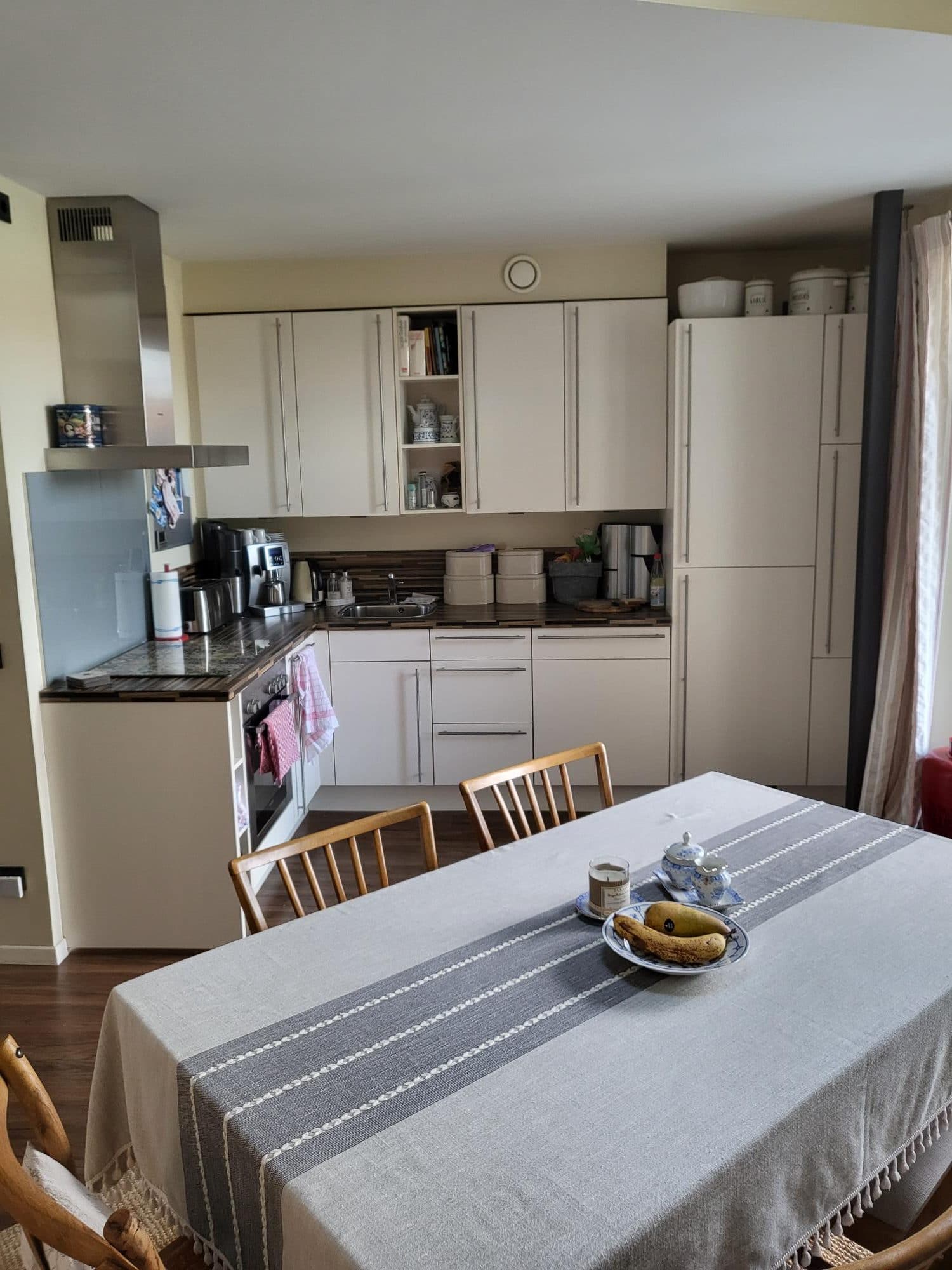